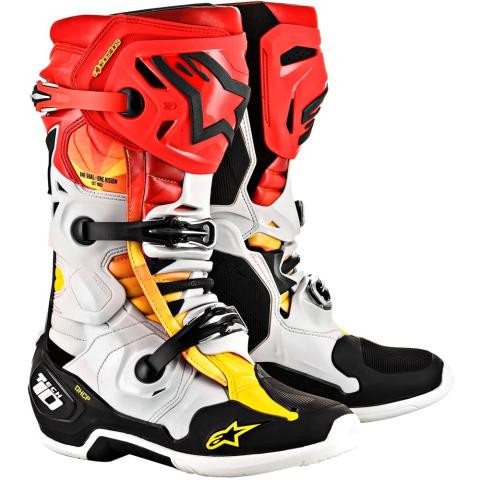 INDIANAPOLIS, INDIANA – the 2019 Monster Energy AMA Supercross Championship heads to the Lucas Oil Stadium this weekend and the competition on the dirt will be intense as the sport’s leading lights duke it out for the win. Indianapolis is the home of US racing, and in recognition of the city’s prominent role in motorsports, Alpinestars has released the Limited Edition ‘Indianapolis’ Tech 10 boot. Inspired by the flame detailing of classic American hot rods, the boot features a distinctive black, metallic red and yellow-red colour scheme.

The CE certified Tech 10 is a technologically advanced and protective boot that incorporates innovative materials in a streamlined design for a lighter, more anatomically profiled performance. The ‘Indianapolis’ blends all of the technological properties of the Tech 10 in a striking colorway, as worn by all of the Eli Tomac, Marvin Musquin, Cooper Webb, Justin Barcia and all of the Alpinestars riders at the meeting, allowing Supercross fans to wear the same boots as their racing heroes.

Building upon the success of the previous model, the new Tech 10 has taken an already great motocross boot and turned it into something incredible. Working closely with the Alpinestars Medical Unit over the past few years, the Alpinestars R&D department spent countless hours, endless resources, and non-stop development and testing in redesigning and perfecting what was already the leading motocross boot in the market. MXstore were some of the first to be fortunate enough to put the new Alpinestars Tech 10 Boots to the test, and we’re more than confident these things are going to blow your mind. Ladies and gentleman, we give you the new Alpinestars Tech 10!

DYNAMIC HEEL COMPRESSION PROTECTOR
Built into the new Tech 10’s unique and lightweight single-piece co-injected foot chassis is the patented Dynamic Heel Compression Protector (DHCP), an innovotive safety feature which includes a fully integrated collapsible heel area with expanded poly-foam to absorb high impact energies during a crash. DCHP features a directional impact protection system which significantly reduces the effect of excessive, potentially injury-causing energy being transferred to the ankle and lower leg. DHCP has been developed and tested in the demanding circuits of professional Supercross and Motocross.